You are here: Home / #About Me / #Movies / #Disney Movies & More / #Disney / Marvel “Guardians of the Galaxy” Music Trivia 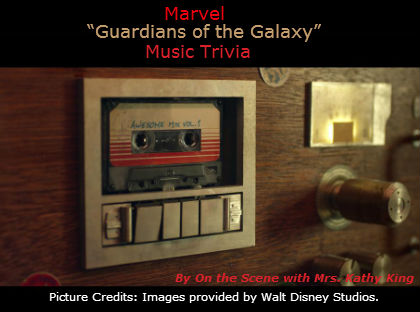 One of the most unique pieces Marvel’s “Guardians of the Galaxy” is the music which plays a major role in the film. When director James Gunn wrote the final drafts of the script, his very first thought was to incorporate a Walkman and the cassette tape which connects Chris Pratts character “Peter Quill” to his home planet of Earth. All of the 1970’s songs featured on Quill’s compilation tape {Awesome Mix #1} were written into the script from the ground up.

James Gunn, had composer Tyler Bates, complete some of the tracks for the movie before the start of principal photography. The music was then played on the set so each actor could gain a better understand of their roles. Let It Resonant – Although, “I Want You Back” by the Jackson 5 is Director “JAMES GUNN” favorite songs of all time, it wasn’t until “Come and Get Your Love” by Red Bone was incorporate into the script, that the whole idea of the mixed tape started resonant with him. Work It Out – The music compilation tape “Awesome Mix #1” was the first thing actor “Chris Pratt” requested to help familiarize himself with a a better understanding of who his character is “Peter Quill” aka “Star Lord”. So he listen to the album over and over again everyday during his workout.

By the time he was ready to shoot his scenes there were some songs he liked and others he could rather do without. However the song he loved the most was “O-O-H Child” by The Five Stairsteps. Why? The beats of the song helped him keep a perfect pace on the treadmill. Pump It UP – Zoe’s is a big fan of the Runaways so of course her favorite song is “Cherry Bomb”. She felt is was a perfect fit to amplify the scene where the montage finally gets the courage to save Xandar. They’re Playing Our Song – He loved all the music and I thought it was such a testament to the movie. He had so much fun with the music, he found himself singing, “Hooked on a feeling” by Blue Swede. His admiration for the song is shared by son. When he took his son to see “Guardians of the Galaxy” for the first time, when the song “Hooked on a Feeling” came on his three year old son sat on the edge of his seat and began to sing along. The Perfect Moment – His favorite song in the film is “Ain’t No Mountain High Enough” because of its’ a feel good song placed at a significant moment in the film. Introduce Yourself – Although Mr. Del Toro, I liked all of the songs on “Guardians of the Galaxy Awesome Mix Vol. 1”. The song “Moonage Daydream” by David Bowie is favorite and it’s also the song used to introduce his character “The Collector”

“Guardians of the Galaxy Awesome Mix Vol. 1” plays a huge part in the film and the albums collections is center around one character’s emotions. However to find out that answer, you’ll have to see the movie.

GUARDIANS OF THE GALAXY opens in theaters everywhere on August 1st!

Before, I let you go, I would like to thank Walt Disney Studio’s for inviting On the Scene with Mrs. Kathy King to the press conference and premiere for Marvel’s “Guardians of the Galaxy”.